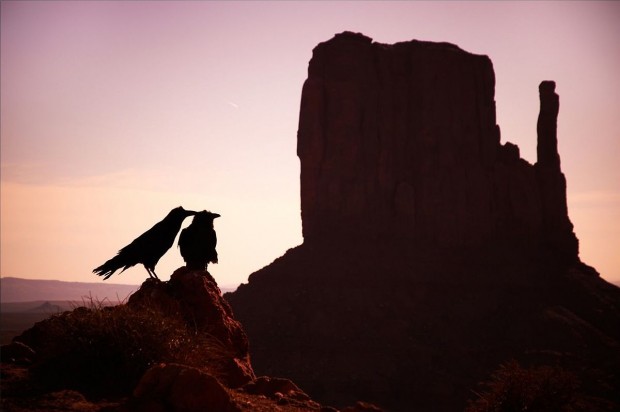 Though it straddles the Arizona and Utah borders, Monument Valley is a symbol bigger and wider-ranging than either of the two states. Watch The Searchers and it’s Texas, watch 2001: A Space Odyssey and it’s a distant planet. From Forrest Gump to Dr. Who, it’s graced the screen in more than a hundred titles—ten of them directed by John Ford alone. It’s served as a picturesque backdrop for pioneering comic strip Krazy Kat and for many a Windows Vista desktop, in photos of everyone from the Marlboro Man to a family of smiling tourists just yesterday.

The valley is found in the heart of the Navajo Nation, and in the Navajo language, the name of the place is Tsé Bii’ Ndzisgaii, which translates to “Valley of the Rocks.” Call them rocks, call them monuments; technically, the massive formations are siltstone buttes, weathered into picturesque shapes by millennia of erosion and tinged a brilliant red by the iron oxide they contain.

The names of the various formations were almost all chosen by Harry Goulding, who not only built the trading post that today serves as the center of tourism, but also introduced John Ford to the valley when the director was scouting locations for Stagecoach. The big three are pictured below. From left to right these are the West Mitten, East Mitten and Merrick’s Butte, (named for prospector and soldier James Merrick, who came here looking for silver and got himself killed by Ute natives): 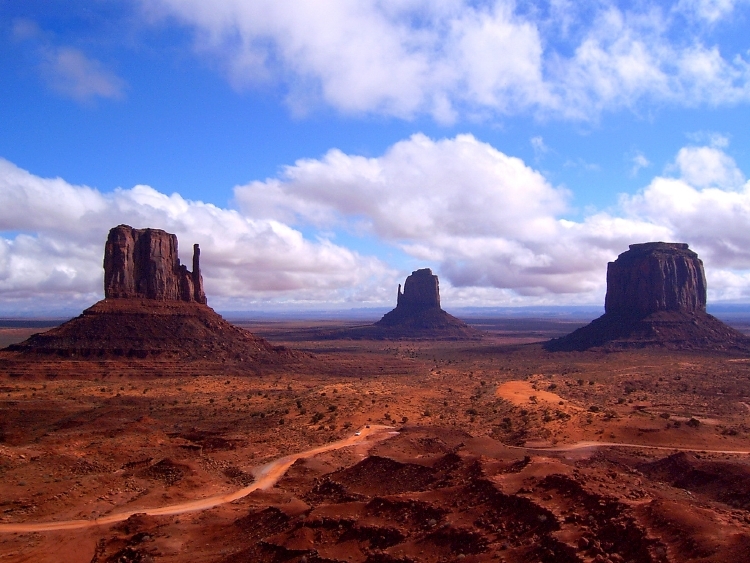 Dominating the middle distance, here, is the gigantic Mitchell Mesa—the natural monument to Ernest Mitchell, Merrick’s brother in arms, in silver and in death. To the left of it are the Three Sisters, narrow spires thought by Harry Goulding to look like a gathering of nuns. 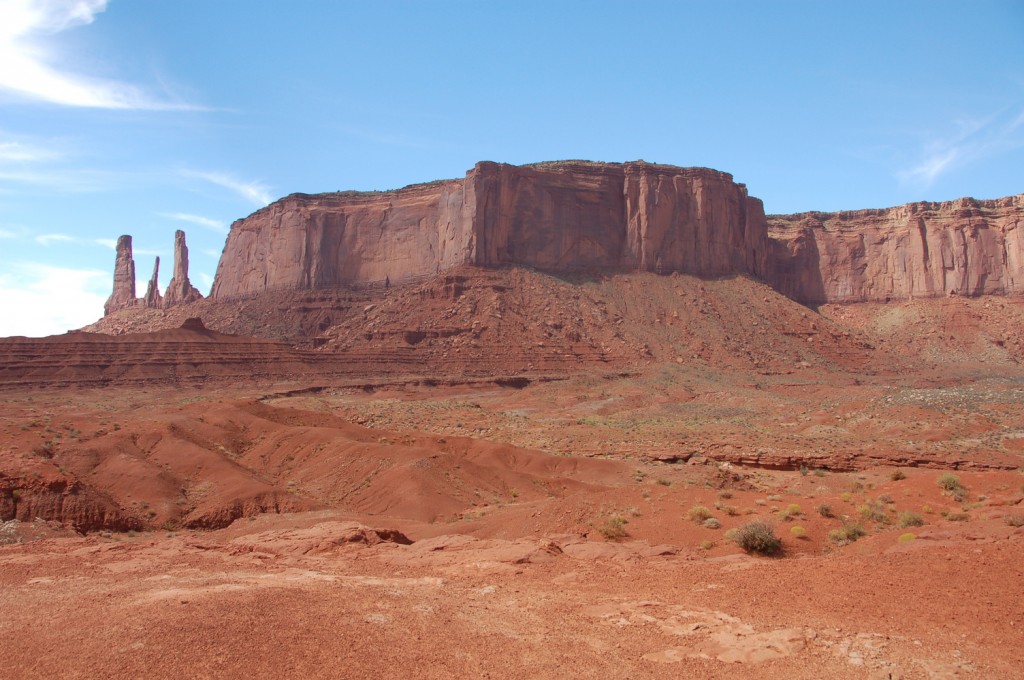 The subject of the following picture is the Totem Pole, so named for its peculiar shape. This formation is a view of the eventual fate of all buttes, worn by long erosion down to a slender column. 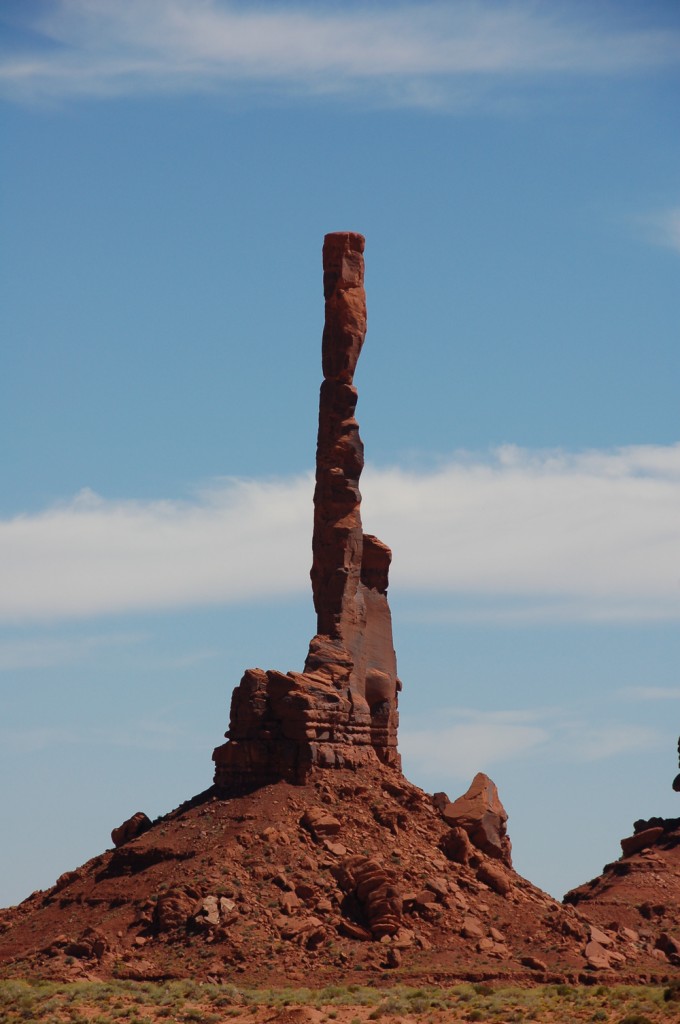 If you just want to glimpse the buttes as you whiz past in your car, the easiest thing to do is to simply take a drive along U.S. Route 163—you’ll get the best view if you do the trip from north to south, coming into Arizona from the Utah border. The view is incredible, but the most famous postcard imagery is all to be found a fair distance from the main drag.

If you prefer to take your beauty at a slower pace and a little closer up, you’re better off venturing into the Monument Valley Navajo Tribal Park east of the highway. Entry into the park is $20 per car, but that will get you into the heart of the siltstone. Past the visitor center, the paved route that leads from U.S. 163 transforms into Valley Drive, a dirt road that loops around all the major formations. Though a bit hilly at points, it’s sufficiently well-maintained for any car to drive it, but cautious drivers might not want to risk it without 4-wheel drive. Fortunately you can rent a Jeep at the Visitors’ Center—and even procure the services of a Navajo guide, who will chauffeur you through the park while explaining the history and geology looming on all sides.

You’re not allowed to venture off the road in most of the park, unfortunately, but for those who need to stretch their legs there’s Wildcat Trail. The hiking path takes you right up to the base of West Mitten Butte and all the way around it. This, too, can be experienced in the company of a guide, Navajo rug-weaving class included.

There’s also the campground, where you can pitch a tent, park your RV or spend the night in an wifi-equipped, air-conditioned cabin. If you like it even more civilized than that, you can spend the night at Goulding’s Lodge or the View Hotel and watch the sun set over the buttes from your balcony. Unlike most other hotels, these ones are a long ways from civilization, but the trading post provides everything you need. The Stagecoach Dining Room serves both American Southwest and traditional Navajo meals, and if you’re not in the mood for a sit-down dinner, the gas station and grocery store supply everything else. There are gift shops at both hotels, of course, with all manner of Navajo crafts for sale.

And if the geography and tours and amenities aren’t enough, there’s also the Goulding’s Trading Post Museum. Here you’ll discover the histories of both dry goods trading and the filmmaking that supplanted it, with period photographs, pottery, and an endless loop of John Wayne movies.